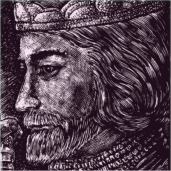 The King Arthur of legend who led the Britons to victory over the Saxons, ruler of Camelot, creator of the Round Table whose knights were pledged to right the wrongs of the world—by the time of our story all this has become a façade. Galehaut, the ambitious and powerful Lord of the Distant Isles, would have easily taken over Arthur's kingdom, had it not been for the appeal of Lancelot. Wise men explain this by saying that the king is ungenerous to his people, uncaring, neglectful of his service to God, failing in his duty to his allies. Hasty efforts to make reparation cannot help.

A significant detail of Lancelot's agreement with Galehaut is that only when the Lord of the Distant Isles has already been victorious in battle is he to surrender to Arthur. After that, whatever the homage paid to Arthur, the king is in fact dependent on Lancelot for the preservation of his realm—whence, most probably, his failure to perceive the relationship between Lancelot and Guenevere. The king is, in any case, easily attracted to other women, notably the enchantress Gamille, who makes him a prisoner in the very fortress he had thought to capture. And the episode of the "false Guenevere" is an extreme, even fanciful, demonstration of the king's inability to distinguish his wife from other women.

A certain degree of heroic valor returns to the king when he goes forth against the Saxon army gathered by his son, Mordred. Gawain, with the prescience of the dying, has told Arthur that he will lose his life if he tries to take that of Mordred. Nevertheless, when his few remaining knights have fallen, Arthur kills his son and receives from him what seems to be a fatal wound. But as he lies dying on a shore, a magical boat appears, guided by his half-sister, Morgan the Fay. Rising to his feet, and leading his horse, the king steps into the boat. His further healing will traditionally occur in Avalon. For the Arthurian kingdom itself, however, there is no hope at all.