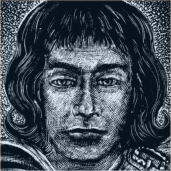 The Sire des Lointaines Isles (Lord of the Distant Isles) appears for the first time in Arthurian literature in the early-thirteenth-century Prose Lancelot, the central work in the series of anonymous French prose romances collectively called the Lancelot-Grail or Arthurian Vulgate Cycle. An ambitious, towering figure of a man, he emerges from obscurity to challenge King Arthur for possession of his entire realm. Though unknown to Arthur and his court, Galehaut has already acquired considerable power, loyal followers, and a reputation for nobility of character. In the ensuing military engagements it is clear that Galehaut’s forces are more than capable of defeating Arthur’s. One thing alone prevents the challenger from succeeding: he is so awed by the battlefield performance of the King’s most ardent defender, that for his sake he renounces certain victory and surrenders to Arthur. He has in fact fallen in love with the defender, who is the young Lancelot, new to Arthur’s court but already secretly attracted to Queen Guenevere. This does not stop Lancelot from gratefully accepting Galehaut's companionship. What follows is a tale of love and self-denial, in which Galehaut figures as a major—indeed, as the pivotal— character: he becomes the doomed third person in a triangle otherwise composed of Lancelot and Queen Guenevere. Just as he has surrendered to King Arthur, he will give way before Guenevere, yielding the young Lancelot to her in an especially memorable scene. Lancelot remains forever torn between his love for the Queen and his profound attachment to Galehaut.

Of all the personages in the story, Galehaut is the only one whose inner life the text explores at length and in depth, the only character whose trajectory is that of a classic tragic hero. If a large part of the Prose Lancelot has long been known as the “Book of Galehaut,” it is because its bounds are defined more clearly by his action and evolution than by anything else.

Galehaut gives depth and complexity to the work's grappling with the meaning and expression of love, with its obligations and its consequences. He is unquestionably the richest creation in the narrative's immense cast of characters. Long after his death, brought about by love-sickness, Galehaut is recalled by everyone as an exemplar of greatness. Lancelot, at the end of his own life, will be buried next to Galehaut in the magnificent tomb that the younger man had built to consecrate and eternalize their companionship.

Since the early thirteenth century, there have been numerous retellings, in various languages, of the life and loves and chivalric career of Lancelot. The story of his adulterous liaison with Guenevere has always been part of every significant account of King Arthur. The second, overlapping love story, however, the one related in the Prose Lancelot, in which Galehaut sacrifices his power, his happiness, and ultimately his life for the sake of the younger man, has been quite forgotten. The character himself reappears in a number of Arthurian tales, in several different languages, but without the same significance.

Lancelot is the book that Paolo and Francesca have been reading in the fifth canto of Dante's Inferno when they yield to their love. Dante briefly mentions Galehaut as the intermediary between Lancelot and the Queen; and Boccaccio, moved by the great lord's generosity, uses his name as the subtitle of his Decameron ("Il Principe Galeotto"). But in later imaginings of the Arthurian myth itself, Galehaut, for all his prominence in the original narrative, was rapidly marginalized and even eclipsed. The greatest retelling in English, the fifteenth-century work of Thomas Malory, reduced the character to one of no importance, leaving Guenevere without a rival for Lancelot's affections; and subsequent novels, plays, poems—now films as well—have accepted that simplification of the tale. Indeed, so obscure has Galehaut become that modern readers sometimes mistake the name for a mere variant of Galahad. Galahad is the “pure,” the “chosen” knight who achieves the quest for the Holy Grail in a part of the Arthurian legend quite distinct from the story in which Galehaut appears. There is no connection between the two figures.